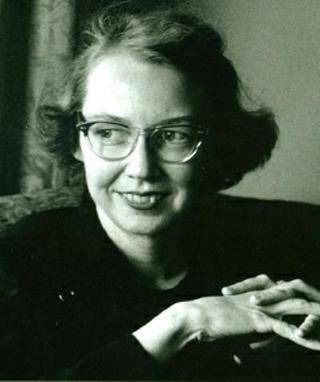 Between Mary Flannery O’Connor’s diagnosis with Systemic Lupus Erythematosus in 1951 and her eventual death in 1964, Flannery O’Connor wrote more than two dozen short stories and two novels. Born on March 25th, 1925, in Savannah, Georgia (USA), she died on August 3rd, 1964 (aged 39) in Milledgeville, Georgia, from complications of the disease, which had also killed her father.

After a strange episode when she was a young girl, being featured on Pathé News for having a trained chicken that could walk backwards, she graduated from Peabody Laboratory School and Georgia State College for Women with a social sciences degree. Whilst she attended GSCW, she served as editor for the college literary magazine, The Corinthian, and contributed many cartoons and written pieces including essays, fiction and occasional poems.

She won a scholarship to the State University of Iowa to study journalism, but after one term she decided that journalism wasn’t for her, and asked to be transferred to the prestigious Iowa Writers’ Workshop to study for a masters in Creative Writing.

Her style has been described as ‘Southern Gothic’, filled with black humour and her characters are often morally flawed. Despite being a devout Catholic, her stories often feature fundamental Protestants. The writing is underpinned by her characters’ struggle with human sinfulness and a desire for divine grace. She wrote: “Grace changes us and change is painful.”

She also weaves dark humour through her stories, often based on the disparity between her characters’ limited perceptions and the awesome fate awaiting them. Another source of humour is frequently found in her portrayal of well-meaning liberals trying to cope with the rural South.

O’Connor was hard-working, spending each morning writing even as she struggled in her later years with lupus. She never married, relying for companionship on her close relationship with her mother and her vast correspondence. Writer Betty Hester received a weekly letter from O’Connor for over nine years.

For her work, she received many honours, including an O. Henry Award in 1957 and the National Book Award in 1972, and she was the first fiction writer born in the twentieth century to have her works collected and published by the Library of America.