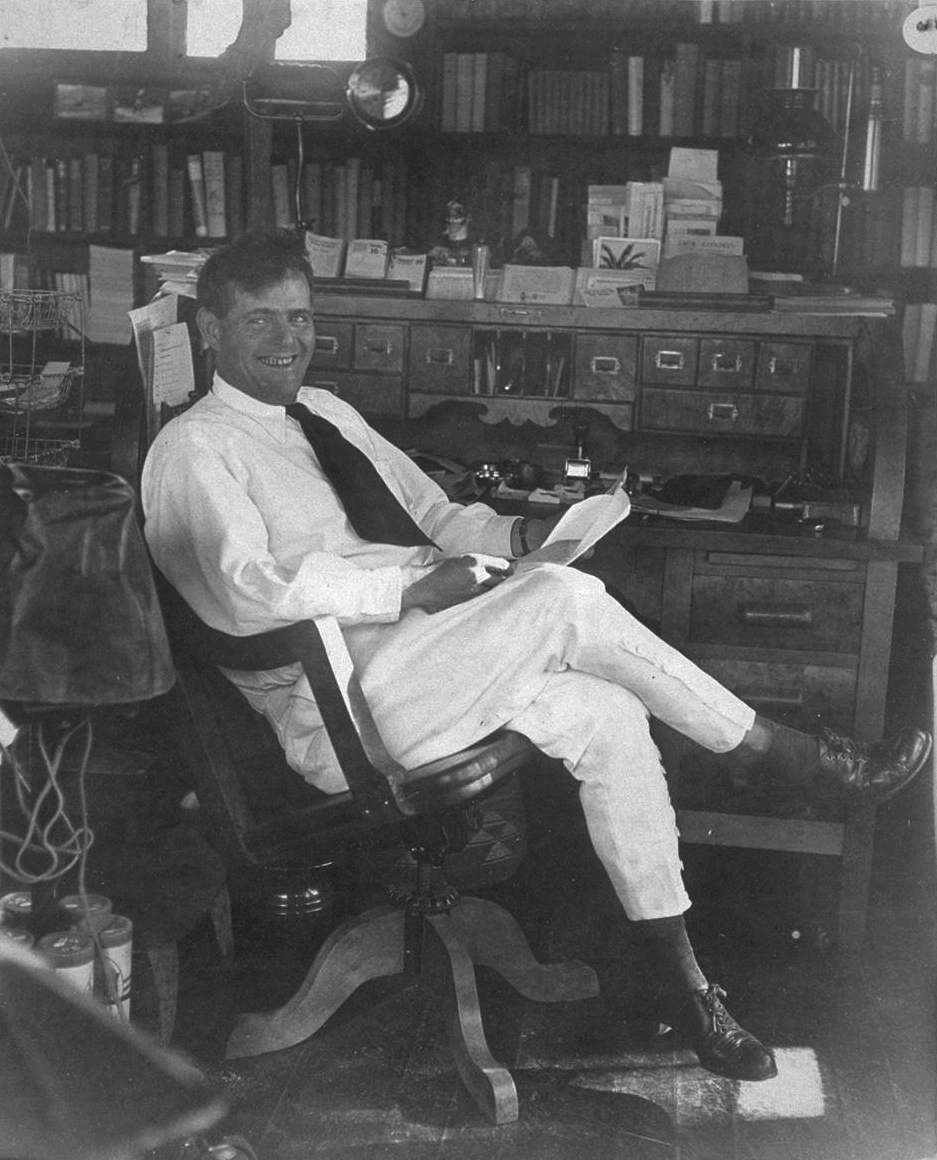 Jack London was born John Griffith Chaney in January, 1876, in San Francisco, California to Flora Wellman. Although records were destroyed in fires that followed the 1906 San Francisco earthquake, it is widely believed that his father was the astrologer, William Chaney. When Flora was pregnant, Chaney demanded that she have an abortion. She refused; as a result, Chaney said that he wanted nothing to do with the unborn child. Wellman then attempted suicide by shooting herself, but escaped without seriously injury.

She carried the child to full term, and a year after his birth, she married a civil war veteran, John London, and Jack took his stepfather’s name.

His interest in literature was initially sparked by the Victorian novel Signa by Maria Louise Lamé (writing under the pseudonym Ouida), and by a friendly local librarian at Oakland Public Library who encouraged him. However, his first job, at age 13, was at a cannery. Desperate for a way out of 12 to 18 hour days, he borrowed money to buy a boat and became an oyster pirate. [Ed. Note: Emphasis mine – Anais]

After his boat was damaged, he signed on as a member of the California Fish Patrol, and then on to a seal-hunting schooner bound for Japan. Following even more gruelling jobs at a jute mill and power plant, he joined the Coxey’s Army’s protest march in 1894, specifically the Kelly’s Army subdivision, and marched on Washington D.C. to protest unemployment that resulted from the panic of 1893. He then led a vagrent life, and even spent some time in jail. Eventually, he returned to Oakland and attended Oakland High School.

Professing a desire to become a writer, he borrowed some money from a bar owner in Oakland, and began studies at the University of California, Berkeley in 1896 at the age of 20. However, lack of money meant that he left college the next year without graduating.

In 1897, London and his brother-in-law sailed to join the Klondike Gold Rush, and despite returning the next year, his experiences of hardship during that time greatly influenced some of his work, especially this week’s story, “To Build a Fire”.

On his return to Oakland, he was determined to further his writing career. Fortunately, this coincided with the arrival of new printing technologies which enabled lower-cost production of books and magazines. His first writing to pay any money was for “A Thousand Deaths”, printed in 1899 in the literary magazine The Black Cat, from which he earned $40.

Between 1900 and 1904, London was married to Elizabeth “Bessie” Maddern, and they had two children. It was during this time that London wrote and sold his novel The Call Of The Wild, perhaps one of his most famous works.

In January 1904, London agreed to work for the San Francisco Examiner as a war correspondent, covering the Russo-Japanese war from Yokohama. However, whilst he was there, London was arrested three times, the last time only being released through the personal intervention of President Theodore Roosevelt. London returned to the United States in June. The following year he married Charmian Kittredge.

London died in November 1916, aged 40, at his ranch in Sonoma County, California. Despite being a robust man, at the time of his death he was suffering from dysentery, uremia, and late stage alcoholism. He was in great pain, and was taking morphine. There are suggestions that his death may have been suicide through morphine overdose.

During his eighteen-year professional writing career, London was prolific – producing 23 novels, 119 short stories, 45 pieces of poetry, as well as plays, autobiographical memoirs and essays. His phenomenal output raised occasional accusations of plagiarism, which he never quite denied outright, instead accepting that there were common areas between his work and that of other writers, particularly Frank Harris, a journalist and biographer.

During his life, he had strong views on race and immigration, on atheism and socialism, and on animal activism. He lived life to the full, wrote well and successfully.