Next month’s novel: A Head Full of Ghosts by Paul Tremblay 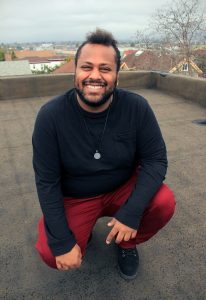 Recently, he was named one of 13 Bay Area Writers to Read in 2016 in 7X7 magazine. In June, Night Shade Books published his debut novel The Root. Set in modern-day San Francisco, this second-world epic and urban fantasy brims with gods, sinister government agencies, and worlds of dark magic hidden just below the surface.

To learn more about Na’amen, visit his website at naamen.org.

On today’s show, Tamara Woods returns as a regular host. Anais, Gerald, Tamara and Na’amen discuss Ben Winters’s controversial novel, Underground Airlines. In Underground Airlines, the Civil War never happened and four southern states still old slaves. Victor hunts down fugitive slaves who cross into the free states, and must reconcile his race and his past with his job.

The hosts analyze the novel’s politics, historical re-imagining, cast of characters, and the effectiveness of the thriller-genre narrative. While talking about race can prove thorny, we embrace the discussion rather than shy away from it.

Did we miss something? Let us know what you think of the novel in the comment section below. Or, if you prefer, leave a voicemail by clicking on the feature to the right. By the way, we may play your voicemail on our next show, so tell us if you would prefer we did not.

Please leave an iTunes review! It helps us attract a wider audience and keep growing.

We air the first Friday of every month, and discuss the books on Twitter between shows using #LRHBookclub.