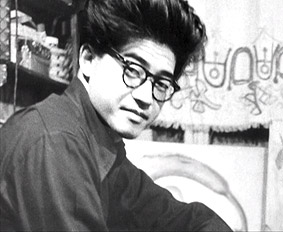 Abe Kobo was born Abe Kimifusa in Tokyo in 1924. (Kobo is the Chinese reading of his given name.) His father was a doctor and taught medicine at a local college. As a small boy, his family moved to Mukden, Manchuria, home of the Manchurian Incident of 1931 in which the Japanese military staged an assault on Japanese railway tracks, and blamed the Chinese as a pretext for invasion. From 1931 to 1945, the Japanese ruled Manchuria as its puppet state under a brutal regime which terrorized local Russian and Chinese populations. From this distant and grim view of his native Japan, Abe grew critical of modern culture.

He returned to Japan in 1941, and enrolled at Tokyo Imperial University in 1943 to pursue medicine. However, his passion for writing, and indifference to medicine prevented a career as a doctor. He graduated in 1948 with a medical degree under the condition that he would never practice, an arrangement which allowed him to save face.

He was first published as a poet in 1947, and then as a novelist in 1948 for The Road Sign at the End of the Street. Though the first novel established his reputation in literary and avant-garde circles, he did not receive widespread, international acclaim until his 1962 novel The Woman in the Dunes.

For more information on Abe, I turned to Rachel Stewart who earned an M.A. in English Criticism and Theory from the University of Exeter. Her thesis titled The Nature of Worlding in Contemporary Japanese Literature will be published in the journal Literature Compass. (Full disclosure: Rachel Stewart is my lovely, delightful, sharply intelligent sister-in-law.)

Anais: On next week’s podcast we’re reading “The Magic Chalk” by Abe Kobo. I know you’ve studied much of his work, and Japanese fiction in general. What can you tell me about Abe as a writer, philosopher, and artist?

Rachel: How fantastic that you are delving into Abe Kobo. He is one of Japan’s better known authors, but his work still deserves a wider readership. He is essentially an absurdist who is often sold to the West as Japan’s Kafka, and that is on many levels true in the sense that he ridicules modernity, but I think he is less humorous than Kafka. From a literary history perspective that so often aims to categorise writers by nationality, he is an interesting case because he was brought up in Manchuria and that has led critics to claim he was better able to criticise modern Japanese culture.

Kobo was very much influenced by Western authors who were beginning to be translated and published in literary magazines at the time, perhaps most significantly Sartre. Kobo was largely concerned with the evolution of humans, which was no doubt influenced by his war experience. I think it’s important to remember when reading Kobo that the Western reader at the time would have had a typically exoticised view of Japan, which is to say cherry blossoms and geishas. His writing certainty helped to raise the status of Japanese literature.  His focus on figures who are marked by the notion of flight, markedly the nomad, deserter, Jew, and gypsy, brings attention to the individual within the state; the concept of which was a contentious topic at the time in Japan, and in many ways remains so.

For a complete contrast I would recommend a ‘High Literature’ author like Kawabata Yasunari or Yukio Mishima, both of whom were very right-wing in contrast to Kobo.

Anais: Could you talk a little more about the difference between Abe and the high literature, right-wing authors like Kawabata and Mishima? What are the main differences?

Rachel: Authors like Mishima and Kawabata were very much concerned with how Japan was perceived by the wider world. Yukio actually committed the most traditional suicide harikiri (seppuku) over the state of Japan’s political future amongst other things. They wrote about huge topics like death and impossibility – Kawabata’s House of Sleeping Beauties is a brilliant example – while Kobo was more concerned with the state of human nature in the postwar years. History plays an important role here as the upbringing of each author varies considerably as does the political atmosphere that they each grew up in. Put simply, Kobo commented on human evolution (or devolution) and society, whilst others are known to have fought against the changes that postwar politics brought to traditional Japanese culture.

Anais: How did ‘high literature’ authors like Mishima and Kawabata receive Abe?

Rachel: As far as I know, Kobo was well received in Japan, even by the very established authors we’re talking about alongside him. The interesting thing about Kobo is that for those who love him he is Japanese, but for those who don’t he is not Japanese, because of his upbringing in Manchuria.

Anais: What exactly is the distinction between ‘high literature’ and ‘low literature’?

Rachel: They’re Japanese terms used in elite Japanese circles, and only really discussed by big name scholars. It’s really a huge area that has a great deal to do with early postwar politics and literary history.  It’s especially difficult to talk about from a Western view point, because it is too closely tied to questions of evolving cultural identity, you see. These days the distinction has become fairly subjective, and it’s a topic that is quite difficult to be politically correct about. Generally, low literature means writing that is not quintessentially Japanese, for example, works that include English words and references to Western pop culture. Murakami Haruki and Yoshimoto Banana are classed as low, while a modern high writer might be someone like Murakami Ryu.

Anais: You said that in some ways the comparison to Kafka is accurate. In which ways is it not?

Rachel: I think there is a more tangible element to Kobo than there is to Kafka. Kafka is more allegorical, while Kobo is at times more of a magical realist. Amazingly they both succeed in having their characters turn into inanimate objects or animals in a way that comments on social issues. The biggest difference for me is that Kobo is more concerned with the individual in modern society (bearing in mind that individualism can be a contested topic in a very group-centered culture like Japan), while Kafka is more concerned with ridiculing society as a whole.

Abe also had a passion for film and theater, writing screenplays and plays for the stage as well. He collaborated with Japanese director Teshigahara Hiroshi on the film adaptations of his novels The Woman in the Dunes, The Face of Another, and The Ruined Map. They also collaborated on The Pitfall, which is a film adaption of a TV series. The screenplay was also written by Abe.

Abe founded a theater company in the 1970’s and put on productions in Tokyo, Washington and New York in collaboration with his wife, Machi, who survived him along with their daughter, Neri, after his sudden heart failure in 1993. He was 68 (Click here for fascinating NY Time obituary).

All Japanese names in this article are listed in the Japanese convention of surname before given name.